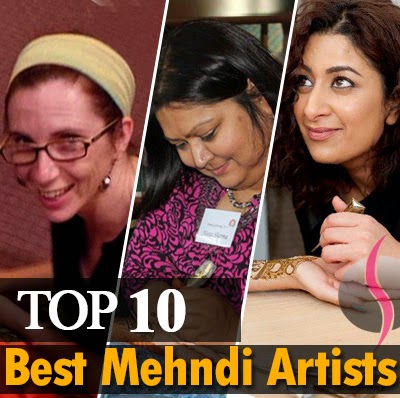 The trend increasing day by day; more number of girls is using mehndi to decorate hands, arms, feet and other body parts. Mehndi has become the compulsory element of functions and weddings especially in South Asia we often seen girls in functions and parties without mehndi designs. Deciding about the mehndi design has become the crucial question nowadays as more number of Mehndi Artists / Mehndi Designers has started pasting mehndi designs professionally. There are hundreds of professional mehndi designers but today she9 makes an effort to list Top Ten Mehndi Designers among the World’s Best Henna Artists. Let’s walk with me through the brief introduction of each top ten mehndi designers and their work.

Social worker by profession; Lady with inborn artistic traits; Neeta Sharma is crazy about Mehndi and designing different artistic and creative designs with Mehndi paste. Initially Neeta took this casually but with the passage of time as she got enormous feedback and love from her clients; Neeta took mehndi designing as her second profession. Now she is ranked one of the top Mehndi Designers of world. Neeta has very creative mind and artistic hands specialized in Indian and Arabic mehndi designs; moreover she’s fine tattoo artist as well.

A lady with more than 10 years’ experience as professional Henna artist is at second number in our top ten mehndi designers list. World recognized mehndi designing work makes her prominent in the eminent of Henna world. Kiran’s work reflects Indian cultural values and traditions. She is expert in floral, leave and mehndi designs incorporating with birds and images. She has beautifully designed hundreds of Indian and Arabic Mehndi designs for her clients.

Sheetal Sheth is an energetic emerging Mehndi designer; though Sheetal is novice among the Top Ten Mehndi Artist but due to her creative Mehndi Designs and diversity she had in artistic sense and taste we have put Sheetal Sheth at number four in the list of world’s top henna artists. Sheetal started mehndi designing as hobby but the love of her client with Sheetal’s creative and magnetic mehndi designs made her professional Mehndi Artist. Sheetal got quality expertise in applying every sort of mehndi designs either Indian, Arabic or mix type of Mehndi design.

Soniya Patel is at number three in the list of Top Ten Mehndi Designers as she worked very hard and put herself in world’s best Henna artists. She is inspired with Indian and Arabic mehndi designs but Soniya Patel made her work quite distinguished with her own creativity and artistic sense. Soniya is just not a Mehndi designer but a creative artist as well as she developed herself to design Arabic, bridal, jardoshi, black mehndi, diamond mehndi, nail polish mehndi, mahndi tattoos, mehendi rings, armlets, payals, and bracelets mehndi designs.

At number seven in our list of top ten Mehndi designer is Henna Oasis. Henna Oasis believes in ancient art of henna as they are providing specialized mehndi designing services in ancient Indian way. Henna Oasis is expert in applying Indian Henna Art and modern tattoos inspired by culture, symbol and historical places of India, Egypt and Arab.

Normaly people think that Henna Art is female profession but here I would like to inform you that applying Mehndi designs on occasions, weddings and parties has become so obvious that it has become a profitable business which attracts dozens of men in this as well. Ash Kumar is one of those male henna artists who took Mehndi designing as profession. Ash is makeup artist and beauty expert by profession but he also got great aesthetics of Henna art and that’s why we put him at number five in the list of top ten mehndi designers. Ash’s expertise in bridal mehndi designs for wedding day and after wedding occasions and parties.

10- Shafiya Refai
Another lady from Sri Lankan land is in our list of top ten mehndi designers. Shafiya Refai is also expert in bridal mehndi designs. Shafiya’s equipped with fashion aesthetics and creative artistic skills which boost her henna art. I hope you girls like this brief introduction on profile and professional work of Best Mehndi Artist.